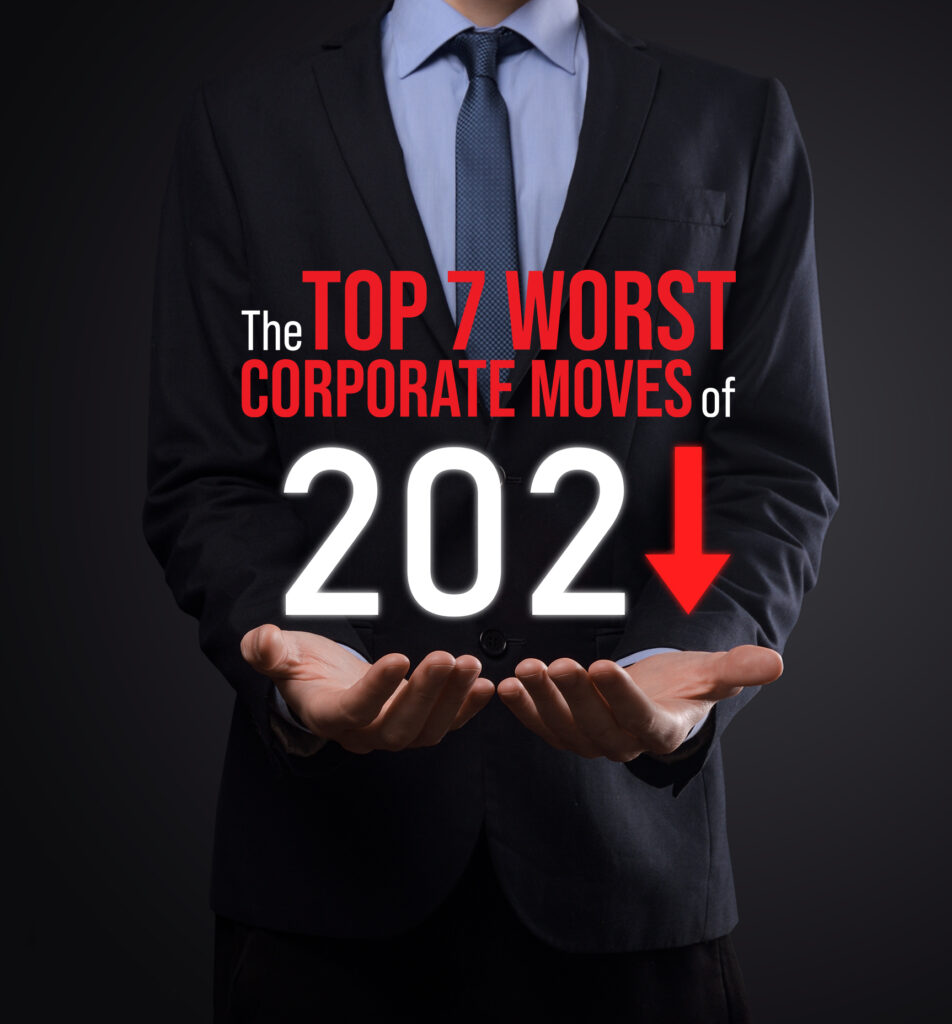 From Suppression of Free Speech to Critical Race Theory, Corporate America Made A Lot Of Bad Decisions last Year

As 2021 draws to a close, American Conservative Values ETF (ACVF) is looking to finish strong with continued growth and a bright future. The same can’t be said for Corporate America, which has stumbled and staggered through this year with a series of decisions that might be politically correct but have proven horrible in terms of business.

Whether it’s wokeness in the form of Critical Race Theory (CRT), suppressing the free speech of conservatives, self-righteous political speech by CEOs, or genuflecting to China, American business leaders have not acquitted themselves well this year. ACVF founders Bill Flaig and Tom Carter decided that, for some holiday fun, a list was in order to document just how badly woke CEOs and woke companies failed this year. Just in time for Christmas, here is ACVF’s definitive list of the Top 7 Worst Corporate Decisions of 2021!

Ah the ever-present specter of censorship by the Big Tech oligarchs who run social media. It’s been happening for years, but it never gets old. Still, we can’t help but feel disturbed by the ease with which these platforms can end something they don’t agree with. Just ask Parler, which was taken down from Amazon’s web services at the start of this year and left dead in the water with the flip of a switch. Still not scared by the economic power of Big Tech?

What’s more annoying than self-righteous activists trying to tell you how to think? Self- righteous CEOs telling you what’s right and wrong. But of late, CEOs sticking their noses into

political matters where they don’t belong is all the rage, even though statistically regular Americans don’t want to hear it. That didn’t stop Delta and Coca-Cola from opining about Georgia’s new voting law earlier this year, just two voices in an outcry that led to Major League Baseball withdrawing its All Star game (and millions of dollars) from the city of Atlanta. We’re sure the local business owners felt so good that Delta and Coke were thoughtful enough to share their opinions.

Critical Race Theory became all the rage this last year, with every corporation under the sun running to adopt it into the employee training manual. If you’re not familiar with CRT, it’s essentially barely-disguised Marxism that white Americans are inherently evil oppressors and that everyone else is a perpetual victim. It’s probably not what Dr. King had in mind for reconciliation, but that hasn’t stopped major employers like Lowe’s and Bank of America from feeding it to their workers. Given how divisive and disturbing CRT is, and how chilling the thought of it being mandatory at a corporation with hundreds or thousands of employees is, we couldn’t not put it on this list.

It goes without saying that the greatest external threat to the U.S. by far is Communist China. China brutally suppresses free speech and democratic elections, while it has a human rights record darker than the inside of a black hole. At the moment, China is outdoing itself with the forced internment of millions of Uyghurs in labor camps. Yet for some inexplicable reason U.S. corporations that love preaching about human rights can’t bring themselves to say a word on China. Is it because of money? Is it pure cowardice? Or is it a little of both? Whatever the reason, Chinese approval is apparently more important to companies like Nike, which lobbied against a bill this year to ban imported goods from the region where the Uyghur camps are located.

Like everything else they touch, the woke seem determined to ruin capitalism itself. Diversity is a beautiful thing and should be encouraged, but for the woke that’s never enough. So instead, the Nasdaq adopted new rules to require companies that list shares to meet certain race and gender quotas. Meanwhile, big investment firms like BlackRock ramped up their push into ESG (environmental, social and corporate governance) investing, which essentially means a fund fulfills arbitrary progressive checklists. Whether or not these can actually turn a sustainable profit is questionable to say the least, but it’s fair to say that these kinds of investments are made with appeasing the woke in mind, not long-term sustainability.

Okay, okay we realize this is technically not a bad corporate decision, but given how bad a decision it was by President Biden to nominate a communist to regulate banks we had to include

it. Plus, it would have most definitely affected the private sector. In August the president nominated Saule Omarova to head the Office of the Comptroller of the Currency (OCC). Omarova, who was born in Soviet-controlled Kazakhstan, wrote her thesis at Moscow State University on Karl Marx. Not a great start, and in the past she has called for “an end to banking as we know it” by “the complete migration of demand deposit accounts to the Federal Reserve.” She also made comments that describe how the total collapse of the fossil fuel industry would help fight climate change. To nobody’s surprise, she got little support from anyone on the Senate Banking Committee and ended up withdrawing her nomination. Seriously, what on earth was Biden thinking?

It’s been a problem for years and there are far too many examples to choose from, but do we really need to explain this one? AT&T owns CNN, Disney owns ABC, Comcast owns NBC. All these networks have been biased against conservatives for years, yet their parent companies all seem content to let it continue as 2021 draws to a close. Are we really surprised with the success of Fox News, Newsmax, Epoch Times, OANN and other conservative media outlets?