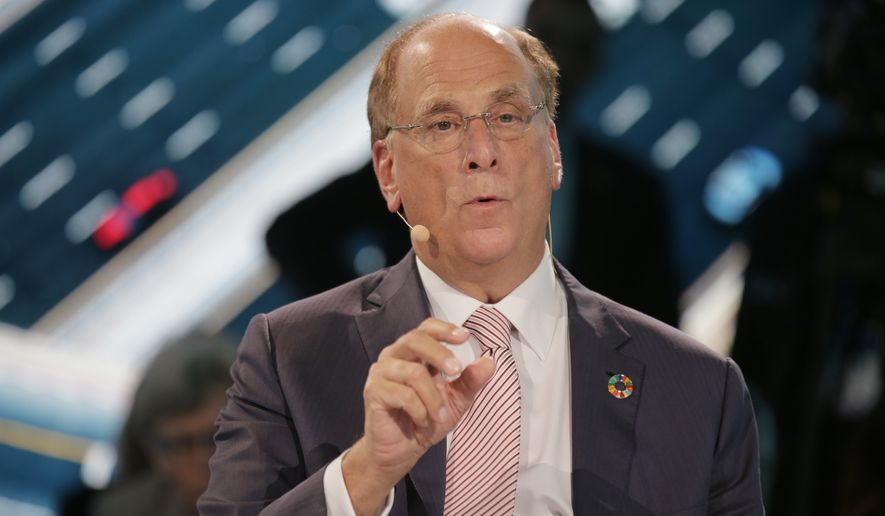 OPINION:
Investment decisions should be based on maximizing the individual investors’ returns, both purposeful and financial. Unfortunately, more and more investors have unwittingly or unwillingly fallen prey to doing what’s in the best interest of others rather than making the best decisions for themselves.

These investment options have become one of the asset management industry’s fastest-growing investment products as well as sources of revenue, referred to as Environmental, Social and Governance. Known colloquially as “ESG,” these types of investments involve, according to Forbes, “investing in companies that score highly on environmental and societal responsibility scales.” Examples include considerations of a particular company’s carbon footprint or the diversity of its board of directors.

In just a few years, ESG has taken the investment world by storm. It’s been lauded by the likes of BlackRock CEO Larry Fink, who in his recent annual letter declared that planning for a “net-zero” future is an important part of creating “durable returns for shareholders.”

We don’t necessarily disagree with many of the goals of ESG, but the problem Mr. Fink and other proponents of ESG fail to see (or just ignore) is that companies and asset managers are implicitly expected to support ESG and invest accordingly. Otherwise, they’re likely to face the tedious task of dealing with the ruling class of social justice warriors who dominate the discourse.

Our larger concern is ESG’s impact on corporate America. Senior managers should be focused on maximizing their shareholders’ returns, not necessarily doing what’s popular in the news. Let individual investors allocate capital; for example, if an investor believes investment in a zero-carbon future maximizes their return, they likely won’t invest in Exxon. It makes sense.

In contrast, an investor with a less clear view of the future might invest in Exxon based on their track record of profits, the result of a successful business strategy that focuses unapologetically on efficiently extracting and distributing fossil fuels. The management team is fully aware of carbon emissions and renewable energy and has concluded that focusing on fossil fuels is the best strategy to maximize their shareholders’ returns.

It’s a textbook example of how investing should be done and has been done for years. Yet ESG’s coercive mindset has allowed a handful of activists in the asset management industry to misuse their delegated proxy power to elect “Anti-Fossil Fuel” directors to Exxon’s board. Exxon’s actual shareholders didn’t do this, and, as a result, environmentalists cheer while Exxon’s actual shareholders and employees suffer.

We have yet to hear a rebuttal to this conclusion, which doesn’t involve clairvoyance and an extremely long investment horizon.

The ESG mindset results from intimidation by vocal political activists (not shareholder activists), direct government intervention, political influence on large public pension funds and the beliefs of a few asset management executives in New York. In what is supposed to be a free-market economy — wherein theory financial decisions are driven by, well, finances — this kind of practice is downright unacceptable. It is a paradox in the very heart of American capitalism.

Consequently, we are now seeing some negative knock-on effects, such as increased regulatory/compliance costs and political speech by senior executives not connected to business strategy. Damage to a company’s brand is caused by the hypocrisy of greenwashing, pandering to political issues and ignoring inconvenient human rights and censorship issues.

The latter example is particularly damaging to company brands when said speech is exposed as blatantly hypocritical. Look no further than the leaders at Coca-Cola and Nike, two companies that have both made shows of posturing against discrimination in the United States while remaining silent on the lengthy record of human rights abuses by the Chinese government. It’s an obvious discrepancy and everyone knows it, and it’s done nothing to endear either company to anyone outside of the activist class.

All of this, along with corporate social initiatives, alienates customers, employees and profits.

In short, political speech rarely helps a bottom line for a corporation and its shareholders. It does, however, alienate customers, employees and profits. A bottom line helps free corporate managers to focus solely on business strategies that maximize shareholder returns (which, by the way, is what they are exorbitantly paid to do).

Rather than letting political activists dictate the direction of a company’s financial decisions, they should instead directly educate and influence individual investors rather than use agency over corporate management. Likewise, unnecessary government intervention and regulation need to be kept out. Let individual investors allocate capital to maximize their returns.

Collectively, let capitalism’s invisible hand and meritocracy do their jobs. Which in addition to maximizing investor returns will also organically address many of ESG’s underlying concerns.

• Bill Flaig is the co-founder of American Conservative Values ETF, an investment fund for ideological conservatives. His founding partner is Tom Carter.