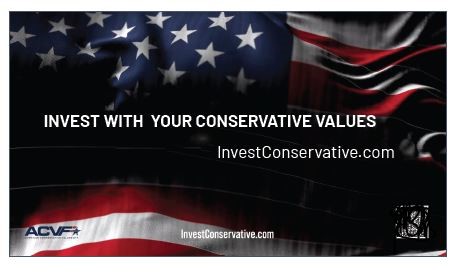 American Conservative Values ETF (ACVF) celebrated another successful year of relative performance and advocacy. It has outperformed the S&P 500 this year (and since its inception.) The ETF steers politically conservative investors away from companies that are either openly hostile to their values or are aggressively promoting “the woke” liberal political agenda at the expense of shareholders. The companies that are excluded from its portfolio currently represent 25% of the S&P 500*.

*Performance data vs. the S&P 500 as well as a list of excluded companies is provided on ACVF’s Sep-22 Factsheet.

ACVF’s priority is shareholder returns and providing an investment alternative for politically conservative investors. Simply put, ACVF seeks to boycott as many companies perceived as hostile to conservative values as possible without sacrificing performance.

“We are doing exactly what we intended when we launched ACVF in October 2020. We provide an S&P 500 investment alternative for politically conservative investors” states ACVF CEO and co-founder William Flaig. Adding “Conservative investors found themselves alienated with limited choices as the corporate world become more and more willing to cater to the demands of the political left. In response, we created this ETF to service fellow conservative investors.”

ACVF’s President and co-founder, Tom Carter, reiterated: “ACVF has proven its ability to balance advocacy with delivering large cap performance. While demonstrating proof of concept, a conservative fund can effectively compete in a market dominated by well-established, left-leaning institutions. ACVF’s advocacy strategy is an expression of our guiding principle – companies should not play politics.”

Believing the economic tool of denying companies capital is a powerful and immediate impetus for management to focus on business. ACVF refuses to invest in the companies most at risk to the “woke liberal agenda” and what we believe is a wasteful misallocation of investors’ capital.

“Our boycotts should reflect concerns within the conservative community – such as suppression of conservative voices by big tech, CEOs engaging in political speech, and companies pushing the woke agenda,” said Flaig.

Tom Carter stated, “We do not want to give the companies that are eagerly working to destroy conservative values our hard-earned investment dollars, and neither should you. Companies like Walt Disney, Blackrock, Google, Amazon, and others.”

Beyond divestment, ACVF’s shareholder engagement targets corporate initiatives that appear to prioritize activities beyond the interests of the shareholders. These activities need either to be justified to shareholders or ceased.

“The desire to limit the financial impact of political speech by executives as well as rolling back corporate initiatives that push environmental, social and governance (ESG) policies, particularly diversity and inclusion initiatives are targets of ACVF’s shareholder advocacy,” said Carter. He added, “We believe in meritocracy in employment and although diversity can be good in certain instances, mandated diversity can negate hiring policies that should be based on merit.”

As such ACVF’s adviser Ridgeline Research has submitted the following proposal for consideration at Microsoft’s December 13th, 2022 Annual Meeting.

“We are proud of ACVF’s accomplishments and its value proposition for our conservative friends and families,” ended Flaig.